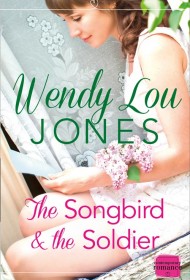 Wendy Lou Jones, whose novel The Songbird and the Soldier was originally edited by Jefferson Franklin, was initially self-published as an e-book on Amazon.

Now though, the tale of romance against the odds between a songstress and a Sergeant in an all-too-modern war has been picked up by Harper Impulse.

The book sees its major imprint re-launch on 25th July. Wendy Lou said Harper would be putting the book on sale with ‘a brand new cover, a few new scenes – but no corrections of grammar or punctuation.’

For more on The Songbird and the Soldier, check out the Harper Impulse website

(buying options right there on the screen).