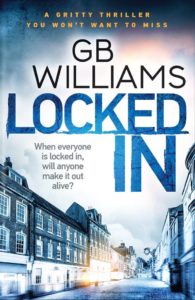 Locked In. Take the phone off the hook, you’re not going to want to be disturbed.

At Jefferson Franklin Editing, one of the perks of what we do is that we get to read fantastic new books ahead of the crowd.

Locked In, by GB Williams, is the second of the Teddington and Bell novels, a gritty hostage thriller that’ll keep you on the edge of your seat from Page 1.

We were lucky enough to read it when it came in for editing. Now it’s your turn – published by Bloodhound Books, Locked In takes the story of Ariadne Teddington and Charlie Bell, a prison guard and a former cop-turned-killer, to explosive new heights, as they’re locked in together during a bank robbery.

When one is a hostage and the other’s a gunman, how can they both get out alive?

Locked In is available for download at Amazon now – get your copy, and say farewell to your fingernails.

GB Williams – she’s going to lock you in for three books.

We’re going to be smug now.

Intolerably, irredeemably smug. In fact, we’re going to dance around the internet doing the ‘We Told you So’ dance.

GB Williams, one of our longest-serving editors, just signed a three-book deal with Bloodhound Books.

We first encountered GB Williams as a client here at Jefferson Franklin, and we were impressed right from the word ‘Go.’ Besides crafting ingenious plots with simmering tensions between her characters, GB proved to have other oseful skills, and now, barring the Editor-in-Chief, she’s our longest-serving Senior Editor. A whizz at research-led realism, believable timelines, involving worlds, complex plotting and characters you’ll recognise as real human beings, rather than walking plot-engines, GB Williams is a writer you’ll want to read – and then an author you’ll want to read more.

The ‘Locked’ series is set to shake up the contemporary crime market from Autumn 2017, when the first of the three books is launched.

GB Williams, folks – you’re going to want to lock yourself in with her books. Check her out at Bloodhound Books here.

What’s more, GB has since also begun negotiations with Xchyler Publishing in the US to publish the first novel in a steampunk adventure series, Shades of Aether, following the exploits of Amethyst Forrester as she becomes an heiress, moves into high society, and ends up saving the British establishment with the cunning application of marzipan. Xchyler knows a good writer when it sees one, and has previously published GB in a steampunk anthology, Steel And bone.

So whether you like your crime gritty, realistic and modern, or Victorian and steampunk, you’re going to want to check out GB Williams this autumn – whichever side of the Atlantic you’re on, she’s going to take your world by storm. 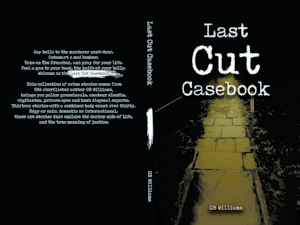 That scent that has no business being there.

That pause in the conversation that’s just slightly too long and changes everything. Changes today to the last day you’ll see.

That’s the bodily knowledge that things are not, not, not what they should be. That things are wrong, and you might not get out of this alive.

If you’re a conneisseur of fear, you’re going to want to slip over to Amazon and order yourself Last Cut Casebook, the latest short story collection from Jefferson Franklin’s own G B Williams.

Thirteen short stories from the Crime Writers’ Association-shortlisted Williams (who’s one of our sought-after Senior Editors) take you into worlds of crime as amateur sleuths and professional detectives pit their wits against mad bombers, twisted predators and the serial killer next door. Get your copy of Last Cut Casebook today, and get reading – just make sure you do it by daylight.

No, seriously, what’s that?