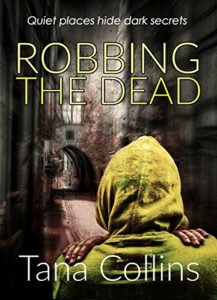 Robbing The Dead, by Tana Collins.

Ten days ago, we posted that Tana Collins’ debut crime thriller, Robbing The Dead, was being released by Bloodhound Books.

Since then, we’re delighted to report that Tana’s novel has sold almost a thousand copies.

Now we know that everything’s relative – in the same ten days, the US President has had to fire a National Security Advisor for inappropriate conversations with Russian officials, invented an unnamed incident in Sweden which led to much of the world, including Sweden, scratching its head as to what he could conceivably be talking about, promised to create peace through armed force in a speech that chilled the world, declared Chicago was ‘totally out of control’ because seven people out of nearly three million city residents died in a night, invented a whole fictitious industry of paid protestors at his events, pretty much declared war on the FBI, and been shown up by the Canadian Prime Minister.

But still, nearly a thousand books. In ten days. If we’re looking for a positive impact on the world, we know where the smart money’s going. Not for nothing, in the same ten days, it’s received 21 4-and-5-star reviews on Amazon, meaning people are not only reading it, they’re also feeling strongly enough to deliver the gold dust of debut authors, positive reviews and feedback, once they’ve finished.

If you haven’t discovered Tana Collins and the Inspector Carruthers mysteries in the last ten days, don’t panic – Robbing The Dead is still available at Amazon, for all of you searching for an involving escape from the real world. We’d love to see Tana’s debut novel hit 2000 sales within its first 20 days on the market. Order your copy now, and become a Tana Collins fan this weekend.

Tana Collins first came to Jefferson Franklin on the recommendation of her friend and fellow author, Alison Bailie, author of Sewing The Shadows Together.

Tana, like Alison, had crime in her heart, and a compelling knack for getting under your skin with her storytelling. We knew big things were coming for her.

She developed a strong relationship with senior editor Gail Williams, especially working on her first novel, Robbing The Dead, which introduces Inspector Carruthers, and in the growing tradition of Scottish crime mysteries, drips with characterisation, tension and twists that kept you guessing right to the end.

Tana recently signed a deal with Bloodhound Books for her first three novels, the Inspector Carruthers stories, and we’re delighted to announce that today, Robbing The Dead is published in both paperback and Kindle editions.

You’re going to want to jump on the Tana Collins train early – the Inspector Carruthers stories will grab you from Page 1, and won’t let you go.

Get Robbing The Dead and discover your next must-read crime writer.

Her name is Tana Collins.